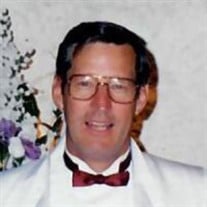 Vernon E. “Sonny” Higgs Age 84 February 2, 1936-November 21, 2020. Born to Beulah Haws and John C. Higgs in Decatur, Il. Vern had a work ethic like no other, was an intense competitor, had the moxy to ask to take his college exams orally, always had a posse to get into mischief with, was un apologetically himself, made friends everywhere and loved a good deal. He made sure once you met him you were not going to forget him. Nothing embarrassed him, and he always had a quick quip to soften any sting. As a child he collected scrap wood, put it in orange crates and went door to door selling it, collected discarded bikes repaired and sold them, ate with hobos in hobo camps, was a gandy dancer for the railroad, a volunteer fireman, was sent off to David Lipscomb Baptist College to be a minister by a group of well meaning church members – but he thought about it and hopped off the train before making it to Nashville, was an ironworker, a computer systems analyst, won awards at his children’s athletic banquets, sat on his neighbor Ernie Pyle’s lap in Dana Point, In, played basketball with Ted Cassidy (later Lurch of the Adams Family) at Stetson University, played against U of L’s Charlie Tyra (Stetson was whipped soundly in spite of having the tallest front line in the country), played semi-pro baseball for the Deland Red Hats (farm team for the Boston Red Sox), and had his straw drawn to caddy for Babe Didrickson at the Decatur Country Club. He married Martha Hennessy the love of his life. He missed her desperately after her death last year. As a father Vern never let you beat him at anything until you could. He was tough and tender. He would do anything for you and that was mostly repair things around your house. He was not demanding but you knew what he expected and it felt good to make him proud. Vern loved being a Papa and had lots of adventures with his grandkids. Teaching them to seine in Brargrass Creek, taking them hiking and canoeing along Harrods Creek, playing tennis with them at their place in Florida and fixing them the best pancakes ever. He got to meet his first great grandchild in early October. He was excited and overjoyed to meet her. He is survived by daughter Pam (Jim Martin), son Mike Higgs, grandchildren, Hank Martin (Hannah), Anna Lovelace (Brendan), Zach and Campbell Higgs. Great granddaughter Harlow Grace Martin. Sister Joey H. Blake. Due to Covid-19 restrictions a private service will be held.

The family of Vernon "Sonny" Higgs created this Life Tributes page to make it easy to share your memories.

Send flowers to the Higgs family.