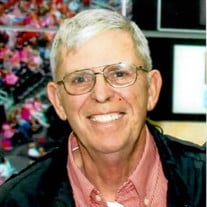 Payton "Pat" George McClish, 74, peacefully succumbed to his battle with pancreatic cancer Friday, Jan. 28, 2022 at Jewish Hospital in Louisville, KY surrounded by his loving family. Pat was born in Louisville, KY on June 7, 1947. He attended Flaget High School and went to work at the United States Postal Service. He retired after 30 plus years of being “the mailman” in the Portland & west end neighborhoods. Retirement did not suit him as he enjoyed being around people and staying busy. So he decided to work at Kentucky Kingdom and deliver newspapers. When he wasn’t working he enjoyed doing crossword puzzles, watching sports and spending time with his family. Pat was an avid fan of U of L and the St. Louis Cardinals. He was a devout Catholic that volunteered his time and talents. He was a Eucharistic minister, a member of the altar society, men’s club and parish council. He was the treasurer and served on festival committees. The church was his 2nd family which he loved. He met and married his lovely bride Mary Jo (Rawert) when they were teenagers. They set an excellent example of a happy, healthy marriage for 57 years. They raised 6 children and have numerous grandchildren and great grandchildren. Pat loved being a daddy but that was nothing compared to being Papaw. He loved the babies and they loved him. Pat never met a stranger. Everywhere he went he seemed to run into a friend. Even in his last few months of life medical staff would remember him from his previous stays even though he wasn’t their patient. His quick wit, sassy humor and gentle personality made him fast friends. He is preceded in death by his dad, Wilbert “Tony” Schenck, his younger brother David Schenck, son-in-law Albert “Al” Spaulding and step granddaughter Carrie Lieras. Left to cherish his memory are his beloved wife, Mary Jo and their children Chris McClish, Cindy Spaulding, Cheryl (Billy) Helm, Bill (Cathy) McClish, Paula (Jason) McClish, Missy (Jim) Glaser; 9 grandchildren Christopher McClish, A.J., Patrick and Courtney Spaulding, Josh Helm, Aaron McClish, Kirsten Cartwright, Laura and Alex Glaser; 4 step grandchildren Corey Lieras, Tiffany Harris, Amber Crenshaw and Matt Harris; 8 great grandchildren and 19 step great grandchildren. He is also survived by his mother, Dolores McClish; 5 siblings, Henry, Tommy, Jerry and Diann Schenck and Raymond Hayes and several nieces and nephews as well as numerous friends. Visitation will be held at J.B. Ratterman & Sons Funerals & Cremation Care 2114 W. Market St. on Tuesday, February 1, 2022 from Noon until 8:00 p.m. and Wednesday, February 2, 2022 from 9:00 a.m. until 10:00 a.m. Mass of Christian Burial will be held at Good Shepherd Catholic Church, 3511 Rudd Ave at 10 a.m. Wednesday, February 2, 2022 followed by burial in Calvary Cemetery at 1600 Newburg Rd. Special thanks to his oncology team, medical providers and the staff at Jewish hospital. With your expertise and his determination he not only survived 2 years with a horrible diagnosis but he lived and was as vibrant as ever. The family requests masks be worn

The family of Payton George McClish created this Life Tributes page to make it easy to share your memories.

Send flowers to the McClish family.