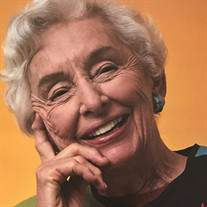 Mary Burton Smith Harris passed away October 7, 2019 at age 93. Burton was predeceased by her husband Henry Ewing, sons Fredrick Rutledge and John Bowen and brothers Fredrick Rutledge and Benjamin Bosworth. She is survived by daughters Mary Burton Nash, Lucy Harris (Babs Brown) and son Hank Harris, as well as 6 grandchildren: Ruby Carol Germeroth (Ryan), Luke Mertz (Charito), Lena Seward (Jimmy), Evan Harris (Kena Tambini), Emily Harris (Ever Velasquez) and Ashe Harris. She is also survived by the light of her life 9 grandchildren: Grace, Eliza, & Mina Germeroth, Seneca and Marlo Mertz; Ella, Addison, & Elijah Seward and Elexi Harris. Burton was born in Montgomery, Alabama on August 13, 1926 to Mary Burton Matthews and Fredrick Rutledge Smith. Even though the Great Depression was upon the country, she described an idyllic childhood on a family operated dairy farm with siblings Fred and Ben, and cousins Clara, Ann, and Harry Porter. Her father, Fred, was the Alabama director of Roosevelt’s Works Progress Administration (WPA). Later, the family moved to Tuscaloosa where Burton attended the University of Alabama and met future husband Henry. After two years of maintaining her independence through graduate school and refusing his proposals, they were married September 23, 1949 and moved to Louisville where Henry began a long career working at Southeastern Paper Company. Perhaps Burton’s most significant accomplishment is her fierce advocacy for her children, especially the three with physical and mental challenges. Her daughter, Mary, was reportedly the first child using a wheelchair to attend public school in Louisville, based on Burton’s insistence, long before the legal mandate. Burton was very civic minded with her memberships in the Woman’s Club of Louisville, Kappa Kappa Gamma sorority alumni group, Bridgehaven board, Wendell Foster Home parents group, church activities, and participating in numerous charity style shows as a model. Her leisure time was spent gardening, camping with the family (notably a three week trip to California), playing tennis well into her 80’s against much younger women, bridge playing, and enjoying pursuits such as entertaining, dinner dances, and gourmet clubs. She and Henry loved travel and went abroad many times. They were also longtime season ticket holders of UofL basketball games, cheering on the Cards court side for more than 60 years. Burton will be most remembered by her physical beauty, exquisite sense of style, and generous nature. She cared for those in need, spoke to everyone and wanted to lighten the spirits of all those around her. Her final home was the Episcopal Church Home where they called her “Sunshine”. Funeral services will be held in St. Luke’s Chapel at the Episcopal Church Home, Friday October 11, 2019 at 2:00. In lieu of gifts please direct donations to St. Joseph’s Children's Home or Wendell Foster Home

The family of Mary Burton Smith Harris created this Life Tributes page to make it easy to share your memories.

Send flowers to the Harris family.