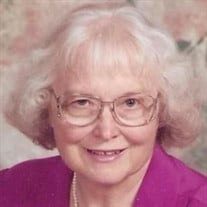 Marion Frances “Midge” Lukasik,91, of Louisville and formerly of Springfield Il,peacefully died in belief that she was returning to her Father on October 21, 2021. Marion was born November 17,1929 near her hometown Brooklyn Il. She was the daughter of farmers Thomas and Maude Lewis. She recieved her baccalaureate in LAS with honors in sociology in 1951,married Dr.John Lukasik in 1950, and raised 3 children- William,John and Karen. In 1972 she was divorced and went back to college to earn her Masters of Library Science in 1975. She ended up working as a school and public librarian throughout central Illinois. Marion was a member of Douglas Avenue Methodist Church and attended Clifton Baptist Church here in Louisville. She moved here in 2003 to watch her grandchildren grow up and ended up getting to watch her greatgrandsons grow. Not only books were here passion- she had a great love for sewing,cooking,gardening and conservative politics. She loved people and often had friends and family stay with her and returned to favortoo. She attended many American Family Association meetings and right to life conferences throughout the years. She firmly believed every life is sacred. Survivors include a son William(Susan) Lukasik of Godfrey Il; a daughter,Karen Lukasik(Ben Tucker) of Louisville, two grandchildren, Anna(Aaron) Newton and John Tucker ,both of Louisville; two great grandsons, Eli Tucker and Sam Newton plus numerous kin mostly in central Iilinois. In addition to her parents, Marion was preceded in death by her beloved son John T. Lukasik,her younger brothers Scott and John and her nephew Tom Lewis. A Memorial Service will be held in Springfield Il on November 17 at 3 pm cst at the Douglas Avenue Methodist church chapel- all friends are welcome. In lieu of flower, memorial contributions may be made to Wayside Christian Mission, PO Box 7249 Louisville Ky or Judicial Watch 425 Third Street, SW,Suite 800, Washington DC 20024

Marion Frances &#8220;Midge&#8221; Lukasik,91, of Louisville and formerly of Springfield Il,peacefully died in belief that she was returning to her Father on October 21, 2021. Marion was born November... View Obituary & Service Information

The family of Marion Frances Lukasik created this Life Tributes page to make it easy to share your memories.

Send flowers to the Lukasik family.