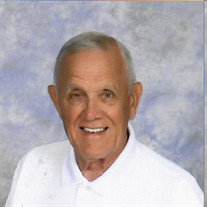 Jim Martin was born in Louisville on March 3, 1928 and died peacefully on January 26, 2022. From humble beginnings on Gaulbert Street, Jim reached incredible heights with kindness, confident intellect, hard work and by always being a gentleman. Jim was predeceased by his beloved first grandson David McDonough, his parents Thomas and Rose, his brothers Bill, John, Pat, Kenneth, Muscles and Moe, his sisters Pidge Diersing and Juanita Miles, five sisters in law, two brothers in law and countless other colorful characters, friends and partners. Jim remained close to his family during their lives. Jim is survived by Betty his spouse of more than 70 years. He loved her dearly and admired her greatly. He is also survived by his five children, two good sons in law, two fine daughters in law, seven grandchildren, and two adored great grandchildren, all of whom he loved and supported unconditionally. Get the kids together Betty: Betsy McDonough (Doug) and their son Nick (Ashley), Linda Mills (Merrill) and their daughters Sarah (Josh) and Katie (Carly), Mary Ann Martin, the family’s much appreciated registered nurse, Jimbo Martin (Pam) and their children Hank (Hannah) and Anna (Brendan), and Kevin Martin (Wendy) and their children Heather (Josh) and Jake, and great grandchildren Ella Cornett, Harlow Martin and a Martin boy due in July. He is also survived by many wonderful nieces, nephews, cousins, and his sisters in law Phyllis Martin and Carol Siemens; he cared deeply for each of them. Jim was a good Catholic. He belonged to Knights of Columbus and operated the beer booth for many years at church picnics. Father Moore at St. George nicked-named 10-year-old Jim “Smudge”, and it stuck. He took a street car with Marty Bronger to his 1946 graduation from St. X. A childhood fever resulted in a perforated eardrum leaving Jim partially deaf and sent him home from Fort Knox. He always lent a helping hand to any soldier he found in need. After the army, Jim bought Martin’s Tavern beginning his successful lifelong barman career. Although he would own many establishments, the crown jewel for him and brother Bill was Kelly’s Lounge, which they owned for more than 50 years. Kevin and Linda were valuable contributors to Kelly’s success. With Joe Siemens, Charley Crush, and Doug McDonough, Jim successfully operated White Owl Liquors for over 50 years. Jim had a gift for numbers and a love of sporting events. He used both to earn a sterling reputation for honesty. He parlayed that reputation and his understanding of politics into helping many politicians get elected. But after missing the call on one election, he and Jerry Bronger paid a friendly wager by pushing a peanut down 18th Street with their noses. Jim used these skills and connections to work successfully in the nursing home business. Jim loved building. He built Kelly’s, White Owl, a couple of chicken restaurants, and an indoor swimming pool at his home to mention just a few. He could fix anything worth keeping with duct tape and a broken wrench. Beginning in the pool he built, Jim became a lifelong swimmer even though the perforated eardrum kept him from ever going under. Jim threw countless epic celebrations for an unbelievable list of guests usually benefiting a deserving person in need or a surviving spouse. His golf tournaments were always oversubscribed. Jim and Betty and friends enjoyed more than 30 winters in Florida. They had great lifelong golfing buddies and too many stories to tell. Jim could recite Lincoln’s Gettysburg Address by heart. He created delicious homemade salad dressings and was proud of his oyster dressing made every Christmas. Alzheimer’s and the Pandemic treated Jim badly, but never diminished the gentleman he was. Jim’s funeral Mass will be held at St John Paul II on 3521 Goldsmith Lane on February 19, 2022 at 10am. Visitation will begin before Mass at 9am. Mass will be live streamed at www.stjpiiparish.com. Jim enjoyed attending Mass with Betty, and memorial gifts may be contributed to Mass of the Air.

Jim Martin was born in Louisville on March 3, 1928 and died peacefully on January 26, 2022. From humble beginnings on Gaulbert Street, Jim reached incredible heights with kindness, confident intellect, hard work and by always being a gentleman. Jim... View Obituary & Service Information

The family of James B. Martin created this Life Tributes page to make it easy to share your memories.

Jim Martin was born in Louisville on March 3, 1928 and died peacefully...

Send flowers to the Martin family.