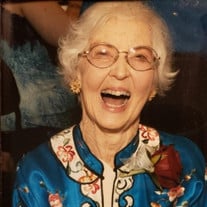 Imogene Croft Barnes June 4, 1926 – July 5, 2020 Beloved mother, grandmother and great grandmother. Imogene (Gene) Barnes died peacefully at the age of 94 in Louisville, Kentucky. She studied her school work by lamplight, in a Western Kentucky farmhouse with no electricity or running water. She learned to drive in a Model T, could milk a cow by hand, make soap, churn butter. She had a beautiful singing voice. During WWII, at a little USO club in Hopkinsville, she sang popular songs and served cookies to soldiers getting ready to go to war. She’d send them letters after they went, was thanked more than 50 years later by one who never forgot those letters. She graduated from college, taught school for a while. She took the role of a wife and a mother. Her husband James Ralph Barnes was a doctor, but she just couldn’t fit the then-tidy role of Doctor’s wife. She loved to read, loved literature, and sometimes, maybe, thought she might have made a writer. Or a geologist. She loved history, rocks, the theater, travel, and the orchestra. She had the most beautiful handwriting. She was fierce, a fighter who would speak truth to power, no matter the audience or the topic, no matter how uncomfortable. She stood up for people, and the underdog in particular. She loved other fighters, questioners, and rabble-rousers. She could be a hard taskmaster, and also tender and caring. Anybody who disrespected any of her children learned not to do that ever again. She was tough and fragile both, with a survival instinct in equal measure to the pain and tragedy she lived through. She was a feminist. A Goldwater Republican turned solid Democrat. A devout Christian turned Non-Theist. She loved a good basketball or baseball game on the TV. She loved to watch the Cubs because a grandson did. With her husband, she’d laugh until she cried at Last of the Summer Wine. She dearly loved all her children, grandchildren, great-grandchildren, and her husband too. And they all loved her as much. Gene is survived by her Children Gloria Hudson (Michael), Kevin Barnes (Terry), Erin Barnes-Driscoll (Brian) and Brian Barnes (Sheralyn); beloved grandchildren Sam Barnes (Rachel), Eliza Maynor (Dustin), Zac Barnes, Colin Driscoll (Amanda), Riley Barnes-Driscoll & Aidan Barnes-Driscoll; great grandchildren Emilie Maynor, Claire Maynor, Grace Driscoll, James Barnes and Malcolm Barnes. A private memorial service will be held at a later date. Memorials suggested to Planned Parenthood, Kentucky Education Television (KET) or your charity of choice

The family of Imogene Croft Barnes created this Life Tributes page to make it easy to share your memories.