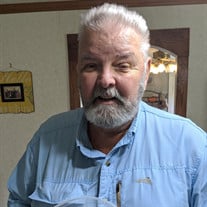 Howard "H.P." Lindsey, 72, of Brownsville, KY., was released to Heaven on Tuesday, Jan. 14, 2020. He had been in the hospital since early December and passed away from heart failure at Sts. Mary and Elizabeth Hospital in Louisville surrounded by his children. H.P. exuded a joyful spirit. He brought a smile to everyone he encountered. His love of his family, specifically his children, was evident to anyone who knew him. Gifted with an incredible story-telling ability, H.P. was known to tell tales so elaborate they stretched believability - but were always entertaining. He delighted in entertaining his friends and family with his stories. H.P. was an avid outdoorsman. His love of God's creation started from early childhood and continued throughout his life. He could tell you what hunting season it happened to be. H.P. could tell you where the fish were biting, where they weren't, and exactly how to fry them up once you caught them. One of his favorite things was to cook up a wild animal and then trying to convince one of his children or grandchildren to be adventurous enough to eat it. H.P. is survived by his sister, Malta, of Sebring, Fla., and his children, Amy Karrick, Christy Thomas (husband: Roger) and Howie Lindsey (wife: Stasia), all of Louisville, as well as 11 grandchildren: Connor, Molly, Ross and Natalie Karrick; Mikaela, Katherine and Laura Thomas; and Howard Joseph, Ruben, Elizabeth Jane, and Stella Lindsey. He was preceded in death by his parents, Howard and Christine Lindsey, and his siblings, Cordelia, Lovella, Eloise, and Yavetta. H.P. will be honored at a remembrance ceremony at one of his favorite places, Barren River Lake, on Saturday, Jan.18, at the Barren River State Park Lodge at 1149 State Park Rd., Lucas, KY 42156. The ceremony will begin at 3 p.m. CST. All are welcome. In lieu of flowers, H.P. would love for his friends to spend whatever they were going to spend on flowers to take their family or friends to a great dinner. Sharing great food while enjoying each other's company would make him happier than any bouquet.

Howard "H.P." Lindsey, 72, of Brownsville, KY., was released to Heaven on Tuesday, Jan. 14, 2020. He had been in the hospital since early December and passed away from heart failure at Sts. Mary and Elizabeth Hospital in Louisville surrounded... View Obituary & Service Information

The family of Howard P. Lindsey II created this Life Tributes page to make it easy to share your memories.

Send flowers to the Lindsey family.