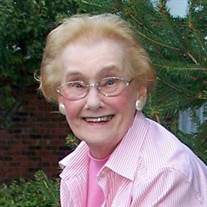 GRACE NELLE BORNSCHEIN Grace Nelle (Hadberg) Bornschein—throughout her life a caring daughter, sister, wife, mother, grandmother, mother-in-law, aunt, and friend—peacefully closed her eyes for the last time on April 28, 2020, at the age of 99. Born in 1921 in McKeesport, Pennsylvania, she moved to the suburbs of Erie while still a child. Her family struggled through the Depression, supported by her mother’s spartan wages as a teacher. As a teenager Grace worked at her parents’ restaurant each evening. A beau foolishly introduced her to his best friend Bob and that was that. After marrying Bob in 1941, she worked as a secretary at General Electric until the birth of her first child. She then worked at her parents’ farm and fruit stand while rearing two children and helping her husband literally build their dream house, doing everything from digging the foundation to pouring concrete and nailing shingles. After years of backbreaking labor, they moved in—only to learn that Bob was being transferred to Appliance Park in Louisville, Kentucky. Eight months pregnant with her third child, in 1955 she moved sight unseen to a house in Fern Creek where she lived for the next 48 years, devoting her time to being a thoughtful wife, wise mother, kind neighbor, and generous friend to all. She and Bob found great joy in square dancing and in hosting summer picnics. A member of St. Gabriel the Archangel Catholic Church for 65 years, Grace also volunteered for many years as the librarian at St. Gabriel School. Books and education were important to her, and she ingrained into her youngest son that “readers are leaders.” Though her mother was a teacher and she herself was the salutatorian of the Wesleyville High School Class of 1938, Grace did not have the means or opportunity to attend college. Still, she valued knowledge and found her own path. As a proud and supportive mother, she spent many nights seated at a manual typewriter, transcribing her three children’s handwritten term papers as they pursued advanced degrees (and eventually became educators at the elementary, high school, and college levels). In a sense, she was self-educated—and in the eyes of her family, she had certainly earned several honorary degrees. Her family members wish to express their deep gratitude to the staff and residents of the Forum at Brookside, where Grace lived joyfully and enthusiastically for the last sixteen years of her life, and where she was frequently spied playing the costumed role of Easter bunny, chef, tiger, clown, cat, fashion model, and scarecrow. Ever the extrovert, her favorite color was red, and she participated in every activity she could squeeze into her days. She had a special fondness for adorning her apartment door with a changing display of cartoons, stories, seasonal decorations, and family photos; her goal was to ease the loneliness of other residents who often walked the halls when they could not sleep. She was also known for baking cookies and rum cakes, which she distributed to Forum neighbors, housekeepers, nurses, groundskeepers, and anyone else whose day she thought she might brighten—never keeping one bite for herself. She loved gospel songs, swing band music, and every dog she ever saw. She never cared much about material possessions, and the only things she ever collected were friends. Watching the ABC national news one evening, she was startled to see a photo of herself selling Girl Scout cookies at the age of twelve. The same photo was later displayed at the Smithsonian National Museum of American History: her proverbial fifteen minutes of fame. Given the gusto with which Grace approached each day, it was almost inevitable that she was selected as the first female recipient of the Forum’s Spirit of Life Award. Grace said she often prayed that when it was time for her to leave this world, she would just fall asleep, and it seems her prayer was heard. Even in her final days, as she lay quietly in bed, her signature red fingernails peeked above the blanket, proclaiming her as someone who had relished living. She passed away on what would have been her 79th wedding anniversary; perhaps she sensed that Bob could not wait any longer to once again do-si-do with the girl of his dreams. Grace was preceded in death by her parents Ida Garvin Hadberg and Albert Columbus Hadberg and her brother A. Clifford Hadberg, all of Harborcreek, Pennsylvania; her beloved husband of 62 years Robert L. Bornschein, Sr.; her deeply-missed daughter-in-law Carol Cebe Bornschein; her sister-in-law Winifred Hadberg Strike; and a lifetime of friends. She is survived by her three children, Robert Bornschein, Jr. of Park Hills, Kentucky; Joyce Barnes (Bill) of Prospect, Kentucky; and William Bornschein (Ginny) of Louisville; by the three grandchildren who brought endless joy to her later years, Anne (husband Evan Jones), Stephen, and Emma Bornschein; by her nephew Rev. Dennis Hadberg of South Carolina and niece Carol Hadberg Rothman of Florida; and by five “bonus” great-grandchildren. Two quotations, sources unknown, are fitting reflections of Grace’s life. “Don’t cry because she’s gone; smile because she lived and crossed your path.” “She never told us how to live. She simply lived and let us watch.” An inurnment at Calvary Cemetery will be held at a later date. A celebration of her life will take place each time a family member or friend brings up her name. Expressions of sympathy may take the form of donations to the Alzheimer’s Association—or Grace would love it if you simply take the time to extend an act of personal kindness toward someone who is feeling forgotten in today’s busy world. She will smile upon you.

The family of Grace N. Bornschein created this Life Tributes page to make it easy to share your memories.

Send flowers to the Bornschein family.