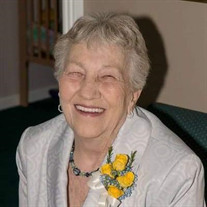 Stevenson, Bonnie L. “GG”(Miller), 85, passed away, Tuesday, May 18, 2021, at home surrounded by her loving family. Bonnie was born March 4, 1936 in Louisville, Ky to the late Calvin R. & Helen B. Miller. She was a retired secretary from Bank One and a member of Bethany United Methodist Church. Bonnie loved to play Candy crush, get on Facebook, and keep up with her family and friends. She never missed “Wheel of Fortune”. She loved her family even if she didn’t agree with their choices, she always supported them. She gave everyone love and prayed for us all. She was faithful and would always say “I love you more!”. “GG” is now at peace and safe in the arms of her Savior. Besides her parents she is preceded in death by her husband, Stanley Wilbert Stevenson. They were long-time community member of the Portland neighborhood, where they became family to everyone they met. They opened their home to anyone and welcomed them with love and kindness. Bonnie had two daughters; Leesa Jolly (Mike); when Leesa married Mike, “GG” became a instant grandma to Paul (Mary) they had four children; Josh Jolly (Katrina) between them they have five children; Katie Lucey she has four children. Her daughter Susan Bagshaw (Timmy) who gifted her with the apple of her eye her best friend, Megan Sauer (Justin); they made her a “GG” with Justice, Justin, Malachi and Maleena. Those grandchildren became her light and brightened her day everytime they busted in her door, which was daily. When Susan married Timmy, “GG” became an instant grandma to Misty Prentice (John), who gave “GG” , Kevin Shon, Lexie and now a “triple G” of Shon, Ryan. Timmy also has a son, Mike Ford (Pamela) and they have several children. Bonnie also has two brothers, Caryl Miller (Barbara) and Kenneth Miller; several nieces and nephews. Visitation will be held Friday, May 21, 2021 at J.B. Ratterman & Sons Funerals & Family cremation Care, 2114 W. Market Street, from 2-8 p.m. Funeral services will be held Saturday, May 22, 2021 at the funeral home at 10:00 a.m. with burial in Louisville Memorial Gardens West. The family wishes expressions of sympathy to honor Bonnie with donations to Hosparus of Louisville and thank them for their care over the past several months of Bonnie.

The family of Bonnie Lee Stevenson (Miller) "GG" created this Life Tributes page to make it easy to share your memories.